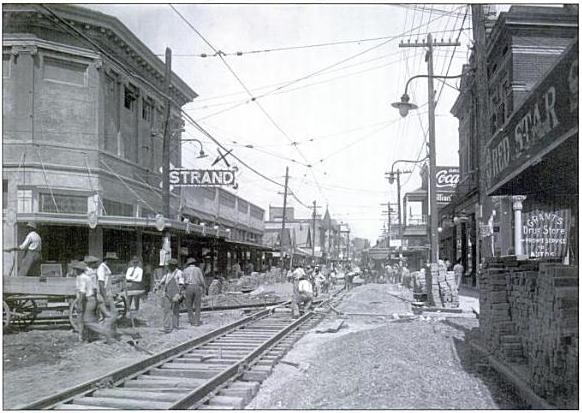 Edward G. Burklin (1860-1931) was born at Vandalia, Missouri.  He came to Biloxi in the fall of 1892 with the purpose of building a flour mill and an electric light plant near the L&N Depot.  He had erected several flour mills in Missouri.  Mr. Burklin returned to Missouri and expired at Carthage, Jasper County, Missouri on June 3, 1931.  At Biloxi, Mr. Burklin founded the light and power plant, first street railway [horse drawn], and telephone system.(The Biloxi Herald, November 5, 1892, p. 4)

The City of Biloxi gave the Biloxi Electric Railroad and Power Company led by W.K.M. Dukate the right to build a railway on Reynoir Street from the L&N RR to Howard Avenue and from Howard Avenue east to Main Street.  This privilege had been granted to E.C. Jouillian (1864-1931) in August 1902.(Harrison Co., Ms. Land Deed Bk. 67, p. 247)

In early July, the Biloxi Electric Street Railway and Power Company contracted to acquire 300,000 bricks from the Biloxi Brick Company to erect their power house on Lameuse Street.  The brick company agreed to deliver 75,000 brick immediately with the remainder to arrive within thirty days.  The bricks cost $8 per one thousand.  It was anticipated that the power house construction would start in ten days.  Also at this time, six miles of trolley wire and the large steam domes of the big boilers arrived.(The Biloxi Daily Herald, July 3, 1903, p. 6)

By early September crews were working feverishly on Point Cadet in east Biloxi.  Track was being laid on Oak Street from East Howard Avenue to the beach and grading was almost completed from Oak Street east to the Barataria Canning Company.  Archille Chiapella (1862-1936) who resided on the east side of Reynoir Street between Howard Avenue and the L&N Railroad was demanding the Biloxi Electric Street Railway Company place their tracks in the center of the street when it fronted his property.  Chiapella’s request was redundant as the company preferred to locate their tracks in the street’s center.  In addition, the street railway company had no control of where the tracks were placed on the street as the alderman of each ward in the city had this power.(The Biloxi Daily Herald, September 3, 1903, p. 6)

The fountain situated at Lameuse Street and Howard Avenue had to be relocated to Lameuse Street and Front Street in order that the electric railway could pass unimpeded.  Martin Hass, the City Plumber, was in charge of the project.  Following the large conflagration of 1889, Harry T. Howard (1856-1930), philanthropist, donated an artesian well and fountain to the City at this location to provide a ready source of water for drinking and fire purposes.(The Biloxi Daily Herald, September 9, 1903, p. 6)

The work of grading Lameuse Street for the electric railroad from Howard Avenue from the Montross Hotel was commenced on October 13, 1903.  Contractor O’Beirne is building the transportation route.(The Biloxi Daily Herald, October 13, 1903, p. 8 and October 19, 1903, p. 8)

In early January, Barney E. Eaton [1878-1944] of the Mississippi Power Company related that street car service between Gulfport and Long Beach had been replaced by motor coaches and that the company had invested about $200,000 in buses and ancillary equipment.[The Daily Herald, January 2, 1926, p. 1]

In March 1926, the Mississippi Power Company announced that a hydro-electric line paralleling the Coast would be included in its $70 million development plan.  The companies hydro-electric plants were situated on the Coosa and Tallapoosa Rivers in Alabama and a 110,000 volt line would be built from the Alabama-Mississippi state line to a step-down transformer station at Gulfport.  Permission had been granted to the company to construct power lines on the bridge across the Back Bay of Biloxi from D’Iberville.(The Biloxi News, March 28, 1926, p. 1)

John Donzelli [1888-1950], native of Sicily, and spouse Mabel Roberts [1900-1982], born in Wisconsin, operated the Golden Fawn Bus Line for several years at Gulfport.  They were victims of the Depression and lost their Gulfport home and in 1929 relocated to Indianapolis where John cleaned busses for Greyhound.  Lucy,a daughter, was born at Gulfport in August 1927.

The Biloxi Herald, “Charter of Incorporation of the Biloxi City Railroad Company”, April 20, 1895.