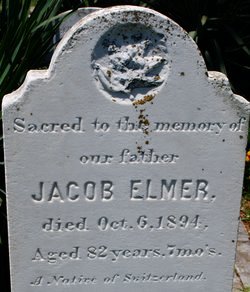 Jacob Elmer (1813-1894) and Barbara Gettendorf (1823-1858) were the progenitors of the Elmer family of Biloxi, Mississippi.  Jacob Elmer was born at Canton Glarus in Switzerland, the same area of the Biloxi Hosli [Husley] and Abbley family origination.  Mr. Elmer came to Biloxi in 1836 and circa 1837, he married Barbara Gettendorf, a native of Winweiler, Rhein Kreis, Bavaria and the daughter of Henry Gettendorf (1784-1837), a native of Keil, Holstein, Germany, and Anne M. Otto (1787-1846), native of Bavaria.

Jacob Elmer expired at Biloxi, Mississippi on October  1894.  To his children with Barbara Gettendorf, he legated all of his property in Jackson County, Mississippi.  These legatees were: Helena Elmer Northrop; the Heirs of Anna Elmer Farror, deceased; F. William Elmer; Augustus Elmer, Otto Elmer, and Charles Elmer.  Augustus Elmer was executor for his siblings.(The Biloxi Daily Herald, October 20, 1894, p. 8)

Abner R. Northrop came to the Mississippi Gulf Coast after the Civil War.  He worked for a dentist in Sherman, Texas before organizing a Calvary Company

Augustus Elmer made his livelihood as

August Elmer II expired at New Orleans on March 18, 1953. He was general manager of the Elmer Candy Company at the time of his demise. He was survived by his spouse; three children; and four brothers.
Mr. Elmer's funeral was under the auspices of Jacob schoen & Son Funeral Home of New Orleans. Services were held at Our Lady of the Holy Rosary Catholic Church followed by internment in Metairie Cemetery.((The Times-Picayune, February 11, 1917, p. 16, March 19, 1953, and December 8, 1975)

Frederick William Elmer was elected Mayor of Biloxi on January 6, 1891.  He defeated two opponents, Zachary Taylor Champlin and A.B. DeLamarre.  Of the votes cast, Mr. Elmer received 392, Champlain 102 and DeLamarre 74.  Mr. Elmer was lauded in the local journal with these words: "[F.W. Elmer is] a man of sound ideas, liberality of opinion, energy and progressive tendencies, and during the years he has previously served his constituency, both as a municipal officer and state legislator, has proven fidelity to Biloxi, his interest inher welfare and displayued an executive ability which fits him for the office to which he had been called."(The Biloxi Herald, January 10, 1891, p. 1)

[for complete history of the F.W. Elmer Home see Homes on this website]

Marie Anne Elmer was born at Biloxi, Mississippi on    .  She married Nicholas Sichirich

J.C. Elmer was educated in the Biloxi public school system and graduated from the Poplarville High School, Pearl River County, Mississippi.  He attended Alabama Polytechnic Institute [Auburn] for three years before going to Charlottesville, Virginia to study law.  After a year at the University of Virginia, he continued his legal studies at the University of Mississippi.  J.C. Elmer returned to the Mississippi Coast after his law studies, he assisted his father in his lumber exporting enterprise at Gulfport.  James Chester Elmer was admitted to the Mississippi bar in May 1907.(The Daily Herald, January 4, 1911, p. 1)

J.C. Elmer was a fine football player.  He played the rugged sport at every college that he attended and was a member of the highly touted University of Virginia squad of 1903.  He was a team mate of future Harrison County Sheriff, Cleveland Pol Huggins (1885-1933), at the University of Mississippi.(The Daily Herald, January 6, 1909, p. 2)

OnMarch 26, 1913, James C. Elmer married Hazel Thompson (1890-1974), the daughter of Erastus R. Thompson (1855-1924) and Mary Ellen Aber (1863-1910).  Hazel Thompson was born at Harrisonburg, Catahoula Parish, Louisiana and came to Biloxi in 1908.  At Harrisonburg, Mr. Thompson made his livelihood as a dry goods merchants.  At Biloxi, the Thompson family may have built a large home in the Avondale Subdivision at 2116 West Beach Drive.  The Elmer-Thompson marriage was held in the Thompson home and their nuptial ceremony performed by the Reverend C.B. Crawford of the Church of the Redeemer.  The newlyweds were domiciled on Main Street and Water Street in a home that was given them by Erastus R. Thompson.(The Biloxi Daily Herald, June 11, 1908, p. 2 and The Daily Herald, March 26, 1913, p. 8 and March 27, 1913, p. 8)

Cora Elmer Enochs, Margueryte's sister,  legated her home on Magnolia Street to her.  After her demise in April 1962, her estate was probated in the Chancery Court of Harrison County, Mississippi.(HARCO Cause No. 45,513-Bk 381, p. 25).

Children of Jacob Elmer and Louisa B. Wetzel

Coresta Elmer, called Cora, was born at Biloxi, Mississippi on    .  She and Nina Elmer, her sister, attended the University of Mississippi in 1897.  Cora had married Thomas Bachino in Harrison County, Mississippi on February 12, 1885.

Cora expired at Chicago on February 2o, 1949. Her corporal remains were interred in the Biloxi Cemetery.(The Daily Herald, February 23, 1949, p. 7)

A.M. Dulion Jr. made his livelihood in the livery and undertaking business at Biloxi.  His business was situated on the corner of Lameuse Street and Water Street.

In 1902, Percy Lee Elmer was described as follows: "Probaby no young man in this community is better known and more popular with his fellows than Percy Lee Elmer. Born and raised in this city, and educated at the Catholic Convent School, he has grown up with new and progressive Biloxi, and numbers his friends by the legion. Mr. Elmer was born in 1873, and although quite a young man is prominent in public affairs, and is now serving his second term as alderman of the second ward. He also takes quite a lively interes in affairs pertaining to the fire department of the city and has filled several positions of honor and responsibility in that body. He is also a member of the Knights of Honor. Mr. Elmer was married in 1896 to Miss Mamie Griffin of this city, and as a result of this union one child was born - a daughter. As the junior member of the firm of Collins & Elmer he is engaged in the general blacksmithing and horsehoeing business, and in his chosen calling there is none better." (The Biloxi Daily Herald, Business and Professional Men, (The Biloxi Daily Herald: Biloxi, Mississippi-1902), p. 69)

Percy L. Elmer made his livelihood as a blacksmith and was associated with the firm of Collins & Elmer.  He was educated at the Catholic Convent school at Biloxi.   Mr. Elmer was a City alderman for six years and former City treasurer.  Percy took an avid interest in civic affairs and was especially active in the local fire department.  At the time of his demise on January 25, 1947, he was the last charter member of the Mississippi Hook and Ladder Company No. 1 of which he was an officers for many years.(The Daily Herald, January 26, 1949, p. 2)

Mamie Griffin Elmer expired on October 10, 1957.  Their corporal remains were interred in the Biloxi Cemetery.

Edwin Ross Elmer (1878-1934) was born September 5, 1878 at Biloxi, Mississippi.  He married Dona Henderson Liddle (1867-1918), a native of Columbus, Mississippi, in Harrison County, Mississippi on June 7, 1911.  She was the daughter of Biloxi Postmaster, William Gaston Henderson (1828-1902), a native of  Milton, Caswell County, North Carolina. and Dona Hubbard (1834-1909), the daughter of David Hubbard, a US Representative from Alabama, at the Hubbard home known as Kinlock.  Her siblings were: Mrs. J.E. Moseley; William Gaston Henderson II; and Mrs. George P. Hewes of Gulfport.(Harrison County, Mississippi Circuit Court MRB 23, p. 237)

In November 1902, Dona Henderson Liddle, the daughter of recently deceased Postmaster Henderson applied for the position as Biloxi’s postmistress to complete the unexpired term of her father.  She was touted by the local journal as “a lady of fine business qualifications and should she receive the appointment will administer the affairs of the office in a manner that will be creditable to the government as well as herself”.(The Biloxi Daily Herald, November 20, 1902, p. 6)

In 1932, Edwin Ross Elmer and spouse returned to Biloxi.  He expired at the Tivoli Hotel on East Beach from an apparent heart attack on April 16, 1934. His wife was the manager of the hotel.  He was survived by his spouse; two brothers, Albert J. Elmer of Jacksonville, Florida and Percy Elmer of Biloxi; and two sister, Effie Elmer Dulion of New Orleans and Coral Elmer Bachino of Chicago.  Funeral services were at the Episcopal Church of the Redeemer followed by internment in at Southern Memorial Park.(The Daily Herald, April 16, 1934, p. 1)

In 1940, Annette V. Gillespie Elmer was a resident of Pass Christian, Mississippi.

The Daily Herald, “The new administration of the City of Biloxi”, January 4, 1911.

The Daily Herald, “Sheriff-elect Elmer will have Bradley and Huggins as Deputies”, December 12, 1911.