Igrane is a village in Croatia, around 19 km south from Makarska. It has about 420 inhabitants.[1]

At the highest point of the village is the "Kula Zale" tower - named after Ivan Anticic [Anticich], and built during the 17th century as a protection against Turks. The Pre-Romanesque church of St. Michael (Sveti Mihovil), dating from 11.century, dominates the village.  Tourism and agriculture are the main sources of income for the inhabitants.

Andrew 'Andy' John Alach, Jr., died Tuesday May 5th, 2015. Born October 16th, 1936, New Orleans, Louisiana, to Margaret Covic Alach and Andrew John Alach Sr., Andy grew up in Biloxi, Mississippi. He met his wife of 49 years, Joan Carol Laurance Alach while attending the Ray-Vogue School of Design in Chicago. He and Joan were married in Chicago January 28th, 1966, and relocated to Lakeland, Florida, in 1971. He is survived by his wife, Joan, his daughter Susan Margaret Alach, his son Andrew John Alach III, daughter in law Kathryn Alach, his sisters Adri Anna Youngs and Catherine 'Connie' Charitat, and five grandchildren, Ellen Catherine Earl, Anthony James Earl, John Cyril Earl, Andrew John Alach IV, and Phoebe Kathryn Alach. He is preceeded in death by his parents and his sister, Dr. Polly Toups. Andy will be laid to rest in Biloxi, Mississippi at the Biloxi City Cemetary at 1166 Irish Hill Drive in the Blaz Anticich family mausoleum. In lieu of flowers the family requests a donation be made to Lions Club International.

Grego Anticich owned this home at 314 East Howard Avenue from

The Biloxi Trading and Packing Company was capitalized with $25,000 in stock with a par value of $1.  Its mission was to ‘own, operate, lease factories and canneries and package vegetables, fruits, oysters, fish and shrimp.(The Daily Herald, September 18, 1920, p. 4)

The Biloxi Trading and Packing Company was located on Biloxi’s Point Cadet.  The organization acquired Lot No. 5, Lot No. 8 and a very small part of Lot No. 9 in Block No. 1 of the Summerville Addition Subdivision.       The lots was acquired from Vincent Olivari in January 1921 for $4750.  The tract was described as: bounded on the north by First Street; east by the Estate of Lazaro Lopez; south by the Gulf of Mexico; and west by the Dunbar-Dukate Company.(Harrison Co., Mississippi Land Deed Bk. 39, p. 79)

The Daily Herald, “The Charter of Incorporation of the Biloxi Packing & Trading Company”, September 19, 1920.

Southern Seafoods owned by Andrew Cvitanovich, president, and A.T. 'Tony' Cviatonovich (1886-1964), secretary-treasurer, leased their seafood plant on Back Bay to Joseph P. Leckich (1904-1950) and Robert A. Fayard (1915-1987) on September 8, 1947.  The small plant was situated north of Bay View Avenue and west of the Southern Shell Fish Company factory.  The lot was small and had been leased to the Cvitanovichs by the City of Biloxi and described as "being the width of Main Street", which it was very near.(Harrison Co., Mississippi Land Deed Bk.   )

Mr. Cvitanovich owned and operated the Sanitary Grocery on East Howard Avenue. He and his brothers, Anthony at Biloxi, and Tom in New Orleans, also formerly operated Southern Seafood on Back Bay for twenty years. He also owned several properties, including apartments. Dominick was a member of the Slavonian Benevolvent Association, St. Michael's Catholic Church and the Holy Name Society.

In 1944, Captain Anthony Cvitanovich, US Army Air Force and USAF, completed flight training and received his wings at Spence Field, Georgia.  During the Korean Conflict, he was assigned to the 18th Fighter Bomber Wing, 5th Air Force flying the F-51.

Samuel  'Sam"  Amos Cvitanovich (1927-2014), age 86 years, of Ocean Springs, Mississippi, died Sunday, March 16, 2014.  Sammy was a native of Biloxi, a lifelong resident of Ocean Springs and was the former owner of Henriettas Café in Ocean Springs for 52 years. His many interests were the love of his family, riding the horn and having his whiskey cocktail. He was also a longtime member of St. Alphonsus Catholic Church and the Slavic Benevolent Society.

The family would like to give a special thanks to a cousin, Nadine Marie Sekul, for all of her help.  Visitation will be on Friday, March 21, from 5pm until 8pm, with a 7 pm Rosary, all at the Ocean Springs Chapel of Bradford O'Keefe Funeral Home. On Saturday, March 22, 2014, there will be an 11 am Mass of Christian Burial, at St. Alphonsus Catholic Church, where friends can visit one hour prior to service. Burial will follow in Evergreen Cemetery in Ocean Springs.(The Sun Herald, March 19, 2014, p. A-4) 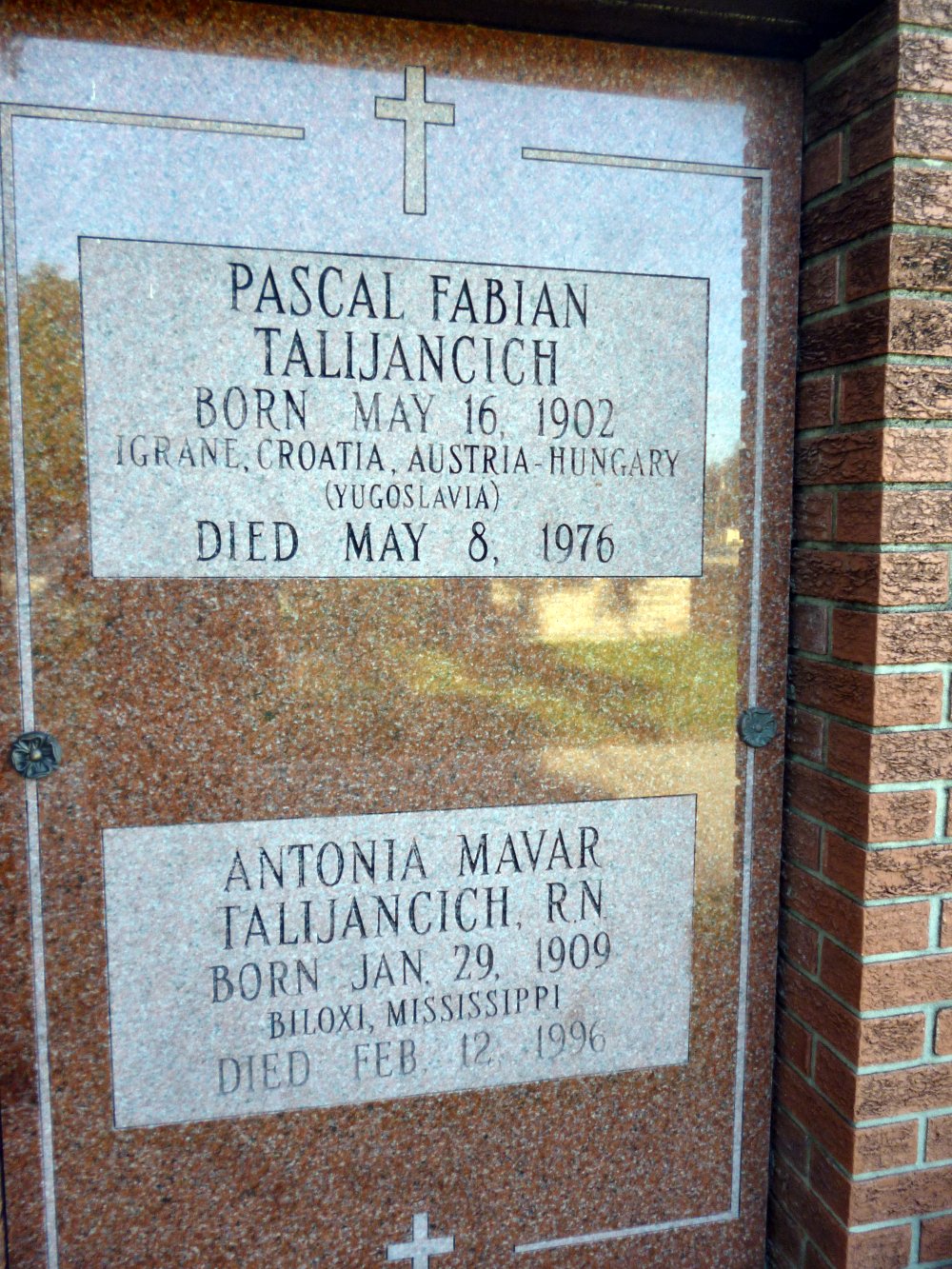 Pascal F. Talijancich was greeted on the docks at New Orleans in early March 1932 by Captain Peter A. Taliancich (1889-1942) and Leopold J. Taliancich (1892-1943), his two older brothers, who had come to the Crescent City from Croatia in 1903 and 1905 respectively.  The Taliancich Brothers were associated together in the oyster shipping and produce business at NOLA.  Peter bragged that he was 'the greatest fisherman on the Coast' while Leopold was a butcher in the French Quarter.  Pascal was invited join his brothers in their enterprises and he was so optimistic of his future here that he exclaimed: "This is New Orleans.  This is heaven to me. I will make my fortune." (The Times-Picayune, March 5, 1932, p. 3)

Pascal F. Talijanich soon developed a partnership with Anthony Zanki.  Their business was the Mid-City Restaurant situated at 4139 Canal Street.  This relationship ended in March 1936 and Pascal opened the Broadview Restaurant at 1420 North Broad Street.  By June 1939, his success here allowed him to buy for $25,000 his restaurant premises and the three contiguous buildings from 1420 to 1432 North Broad.  While a resident of NOLA, Pascal was a member of the Young Men's Business Club and the Mid-City Carnival Organization.(The Times-Picayune, June 14, 1939, p. 13 and The Daily Herald, May 24, 1952, p. 4)

Pascal F. Talijanich died on May 16, 1976.  Antonia Mavar expired on February 12, 1996.  Their corporal remians were interred in the Biloxi Cemetery.

The Times-Picayune, "Jugoslavian, 26, see brothers in city for first time",